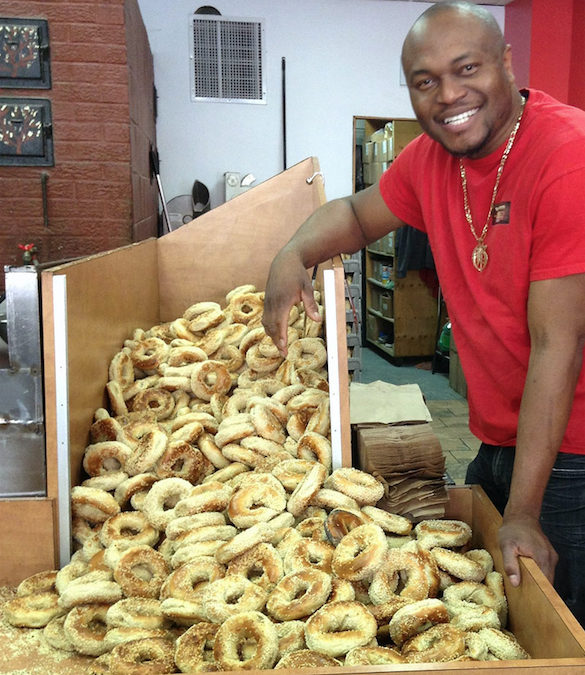 M.T.L. Bagels made with passion

“I realized the bagel industry wasn’t what it used to be: The quality had gone down. The costs of ingredients had gone up, so to keep profitable most shops kept on cutting the ingredients.”

Spence wanted to buck the trend, so he opened M.T.L. Bagel.

“I wanted to open my own shop and give my customers quality ingredients.”

He moved to Côte Saint Luc in 2014, opening on 5452 Westminster after closing his shop on Montreal’s South Shore. He’d been making bagels on the South Shore since 2005.

M.T.L Bagel store had been a bagel shop since 1985, so it was a destination for Côte SaintLuc bagel lovers.

Yes, there was plenty of competition. But the new owner was confident this Montreal bagel shop was in the right spot.

“I know I was passionate about making bagels and I had a good recipe.” Spence recalls.

A secret recipe that’s not so secret

“The recipe is a secret and not a secret because we all use the same ingredients.  The only difference is the quality of ingredients. The secret is to use the quality ingredients they used in 1919 and give customers good service and a quality product.”

When Spence talks about the ingredients they used in 1919, he knows what he’s talking about.

It was Shlafman who gave Montrealers their first taste of bagels rolled by hand and baked in a wood-burning oven.

Shlafman arrived in Canada in 1919 and opened the Montreal Bakery, which migrated to Fairmount Avenue in 1949 to become the legendary Fairmount Bagel Bakery.

Carrying on the Fairmount tradition

Spence arrived from the Caribbean in 1993 and needed a job to help pay for his school tuition. He got one at Fairmount and stayed on after finishing school to learn a trade: bagel making.

He left Fairmount, or should we say Spence graduated in 2001.

“Montreal bagels are known for the wood-burning oven. Cooking the bagels in honey water gives the bagels that special texture – crispy on the outside and soft on the inside. That’s what makes a true Montreal bagel!”

Bagels for the Millennial palette

But Spence knows tastes change. So, he’s added flavours like jalapeño and cranberry to the menu.

“These aren’t common,” he explains, “but I believe there is a younger generation coming in asking for new flavours.”

Jalapeño is a cold-weather favourite with customers who want a fiery taste, while cranberry started out as a yuletide favourite that stayed on after Santa left town.

Spence also claims bragging rights to the coconut bagel, which he invented when he opened his first store on the South Shore.

“Now, you can find it in shops around the city.”

Many of his customers make the journey to his shop from Laval and Brossard, “from all over.” They are what the car dealers call “conquest customers.”

“People taste one of our bagels and they taste a special flavour. Then they come here for it. A lot are young couples and some older people who taste a flavour they can’t get anywhere else but here. So, they come here to get it.”

To keep them in bagels, Spence punches in at 3:30 a.m. and leaves the shop 16 to 18 hours later after working with staff to bring 2,500 bagels into the world.

“Crazy hours,” he calls them.

Despite this, Spence is an entrepreneur at heart. He dreams of a bagel café where bagel lovers can linger over bagels, salads and soup.

Will this add to his work load? No, says Spence because he’s looking to franchise.

Here’s a tip for M.T.L. Bagel lovers: Don’t be afraid to freeze them. Just slice them in two and pop them in the freezer. When you want them, there’s no need to defrost. Just put them in the toaster. Tastes as good as when they came out of M.T.L’s wood-burning oven.